I was going to post the remainder of Santa Claus vs the Martians today, but instead the whole book got posted, along with extensive annotations, at ComicsAlliance. Check it out!

Posted via LiveJournal app for iPhone.

If you'll recall, I have been posting pages from Santa Claus vs the Martians here due to the fact that the print version of the book has been delayed a year.

The finale of chapter one on Friday!

I have been posting the first issue of Santa Claus vs the Martians for free on internet, because of problems.

Part one is here.
Part two is here.

Story by me (Benito Cereno), art by James Harren, letters by Ed Brisson.

As I mentioned the other day, we hit some unforeseen complications, and our four-part Christmas sci-fi epic Santa Claus vs the Martians will actually hit shelves NEXT Christmas.

But I wanted to share some of it with you, so between now and Christmas, I will be posting some pages.

Part one is here.

If you have enjoyed what you have seen so far, the number one thing you can to do help us out is spread the word! Share this link on your Twitter, blog, Tumblr, Facebook, whatev.

(The number two thing you can do is click that donation button and give me some money to buy presents.)

So, due to some unforeseen circumstances, Santa Claus vs. the Martians has been delayed and will not hit stores until next Christmas. However, because too much hard work went into the book for you not to see what's been done, I've decided to share some of the book with you.

From now until Christmas, I will upload some pages from the book, lettered but mostly uncolored, and then probably take them down after the holidays. So if you like what you see, tell your friends now, because it won't last forever.

So here you go. The first seven pages of issue one.

Story by me (Benito Cereno), art by James Harren, letters by Ed Brisson.

(W) Benito Cereno (A) Les McClaine The Tick wants a pet and to prove to Arthur he can handle the responsibility, he volunteers to baby-sit for other pet-owning super-heroes. But, as can only happen in The City, those super-heroes have out-of-town business - all at once - leaving The Tick 'in charge' of a wild menagerie of strange super-pets who decide that 'when the owner's away, the pets will play!' Can The Tick and Arthur regain control over 'animals gone wild' before The City is turned into a wilderness itself?

(W) Benito Cereno (A) Les McClaine The first 6 issues of the new and critically-acclaimed Tick series from the fertile minds of Benito Cereno and Les McClaine are collected for the first time! You will meet a whole new cast of characters like The Scarf Ace, Deperadoe, and the ever lethal Sewer Mimes to name but a few. Plus many other all-new wacky Tick exploits that are sure to be instant classics! All initial orders of this book will be signed and numbered by the whole New Series crew!

SO! If you are one of those people who have been telling me you're just waiting on the trade for this book, time to nut up or shut up! Here it is.

I would prefer you support local business and pre-order this from your local comic shop, in which case the order number for this book is DEC101018. It is on page 285 of the Previews catalog! Only pre-ordered editions will be signed and numbered!

If you are one of those people whose comic shops hate money and will refuse to order a book someone specifically asks for, look at all these goddamn places you can buy it online, AT A DISCOUNT:

HOLY SHIT LET ME GOOGLE THAT FOR YOU

So this is how I am accidentally going to be published by Dark Horse:

THE ADVENTURES OF DR. MCNINJA: NIGHT POWERS
Chris Hastings (W/A), Benito Cereno (W), and Les McClaine (P)
On sale Apr 20
FC, 232 pages
$19.99
TPB, 7" x 10"
What's better than an evil unicorn motorcycle, monster gang wars, a tennis match against a god of destruction, and bandidos on velociraptors?
…Yeah, we couldn't think of anything, either!
Award-winning cartoonist Chris Hastings teams up with Dark Horse Books to bring his smash-hit webcomic to print with the first three full-color story arcs of Dr. McNinja, as well as an exclusive-to-print story by Benito Cereno and Les McClaine.
• Collects "Monster Mart," "Death Volley," and "Doc Gets Rad" (previously published at www.drmcninja.com), and the new, exclusive-to-print story "Beyond Winter Wonderdome."
• Drmcninja.com receives up to 200,000 unique visitors on update days.

NOTE: The story here by me and Les, "Beyond Winter Wonderdome", is a full-length 24-page adventure. ALSO: it is in the same Christmas continuity as Santa Claus vs. the Martians, for all you continuity hounds out there.

Hello, everyone. I have not posted in a while, so I am going to do a couple of posts about some projects I have coming up. I will separate them by publisher to make it easier...for me?

GUARDING THE GLOBE #6
story ROBERT KIRKMAN & BENITO CERENO
art RANSOM GETTY
cover RANSOM GETTY & FCO PLASCENCIA
JANUARY 26
32 PAGES /FC
$3.50
As the hit miniseries comes to it’s conclusion, The Order finally make their move. The Guardians of the Globe find themselves up against the biggest threat they’ve faced to date and not everyone will make it out unscathed. Also in this issue: The final fate of Robot and Monster Girl is revealed!

LOVEBUNNY & MR. HELL, VOL. 1 TP
story TIM SEELEY
art TIM SEELEY & VARIOUS
cover TIM SEELEY
JANUARY 12
128 PAGES / FC
$14.99
Before HACK/SLASH, TIM SEELEY introduced another critically acclaimed duo to the world in the form of dysfunctional superheroes, Lovebunny & Mr. Hell! Former sidekick Beth Bowers wants to be her own hero, but she's saddled with a sidekick of her own; the demonic, eternally hungry Mr. Hell! Long out of print, their twisted adventures return in an all new, volume in full color for the first time! Include EVERY appearance of LOVEBUNNY & MR.HELL to date including the HACK/SLASH strips and the crossover with Savage Dragon!
RETAILER WARNING: MAY NOT BE SUITABLE FOR ALL AGES

NOTE: I only have a one page story in this, but there it is. So, you know. Don't buy this for my sake. Buy it because you think it's cool or funny or whatever. Or because Tim Seeley is a cool guy.

SANTA CLAUS VS. THE MARTIANS #2 (of 4)
story BENITO CERENO
art & cover JAMES HARREN & DYLAN MCCRAE
JANUARY 5
32 PAGES / FC
$3.50
When unidentified flying objects snatch a couple of teens doing some heavy petting up at Inspiration Point, will the jolly old elf be able to fly the Little St. Nick fast enough to make sure they get back home for the holidays?

NOTE: On the one hand, this is not the final version of the cover. On the other hand, I am nearly positive this is the first time Bellsnickle has ever been on a comics cover. Can anyone confirm?

SANTA CLAUS VS. THE MARTIANS #3 (of 4)
story BENITO CERENO
art & cover JAMES HARREN & DYLAN MCCRAE
FEBRUARY 2
32 PAGES / FC
$3.50
After the Martians dare to invade Earth again after being driven off twice, Santa decides to use all the resources at his disposal to send them packing for good. What follows is an all-out battle across the skies for the fate of all humankind!

So that's what you have to look forward to in the next couple of months in terms of my Image output, everyone!

Today is All Souls' Day, the day in which we pray for the recently dead. Yesterday, however, was All Saints' Day, the day on which we give wicked high fives to all the saints. And that's what I want to talk about today.

Here are some saints and martyrs that you might choose to venerate this week based on your own unique situation in life: 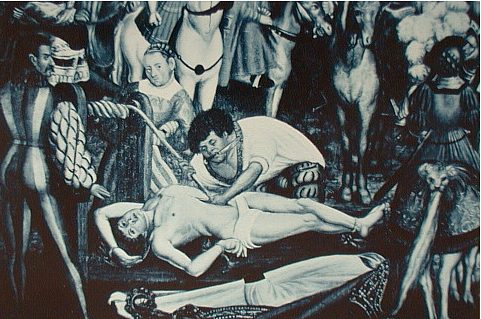 Erasmus of Formiae, protector of pyrotechnicians, steeplejacks, chimney sweeps, sailors and anyone who works at great heights, due to his sweet ability to dodge lightning

[photo not available]
Gang Bing, patron of eunuchs, from the time he cut off his own genitals and hid them in the emperor's saddle bags (not a euphemism) as a show of loyalty or something 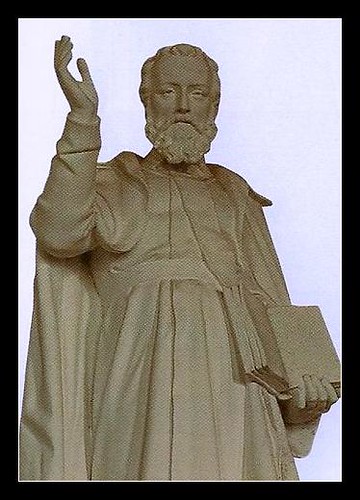 St. Maturinus, exorcist and protector of clowns and jesters 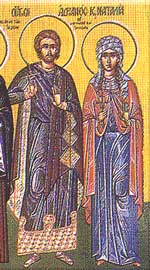 Sts. Adrian and Natalia of Nicodemia, who use their holy powers to protect arms dealers

Albinus of Angers, invoked against attack by pirates and incestuous weddings 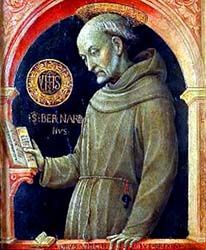 Bernardino of Siena, for your gambling addiction (you know who you are)

[not pictured: St. Denise, often seen with Peter, Andrew, and Paul. But not THAT Peter, Andrew, or Paul.]
St. Denise, invoked against totally wrecking your tallbike, no matter how many PBRs you've had. She will remind you to roll that one pants leg up. 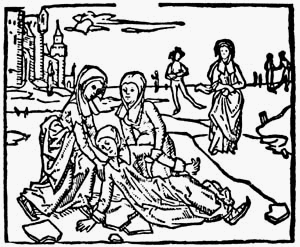 Drogo of Sebourg, patron of the unattractive and Starbucks baristas. If you are an ugly barista, you are doubly blessed.

Happy belated All Saints', everybody.

Here are some things about Halloween:

It is super high-quality printing and paper. It looks like this:

You can purchase it here:
http://fetorpse.blogspot.com/2010/10/happy-hectorween.html

I won't spoil the picture for you, because it's so fun, but here's the title: "GALACULA THIRSTS!"

Speaking of ComicsAlliance, I contributed a piece to a feature in which spooky writers such as myself AND R.L. FRICKING STINE talk about their favorite scary story or scary childhood memory.

As such, I wrote up an epic tale of young Benito.

"The Time the Church Ghosts Tried to Kill Me

When I was a child, I was convinced that the church was haunted. Even then, I could see the logical inconsistency: how could a church be filled with ghosts? A Dracula couldn't step foot on consecrated ground, how could something so much lower on the Hierarchical Ladder of Monsters (Draculas--> Frankensteins--> Wolf-Mans--> Freddy Kruegers--> Teen Wolves--> Ghosts) not be automatically incinerated by the Holy Ghost Power (the Holy Ghost obviously having been granted special dispensation by the church)?

Regardless, I imagine any sufficiently large building absent of warm bodies, in a child's imagination, becomes full of dead ones. An empty Toys 'R Us might as well be the Amityville Horror house if it's quiet and all the lights are off. And so, once apart from the protective presence of my family, I became convinced nameless, faceless revenants lurked not only the church's interiors, but its whole grounds.

I was frequently able to ward off fears of these spirits by being frequently armed with the officially licensed Ghostbusters 2 noisemaking keychain I got from Hardee's. A fully functional spectral dematerializer and much more compact than a proton pack, this little beauty offered me protection from the dead in a variety of wavelengths, including triggers for rays sounding like a car alarm or a bomb whistling through the sky and then detonating. It was all very technical."

No new Hectorween this year, sorry. But if you've never seen it, here is the animatic musical version of "Hector contre la Danse Macabre" Nate and I made last year:

Unrelated to either me or Nate, here is a pretty awesome comic getting passed around this Halloween:

finkenstein made the world's best Halloween costume. You can see it here:

In other, less interesting costume news, here is me in my costume:

Professaur Rex if you prefer.

That mask is handmade by me and Nate. No one was selling dinosaur masks this year for some reason.

Here is Nate's costume, linked for your own protection.


If you have some cool pictures of your costume, please feel free to share!

And there you have it.